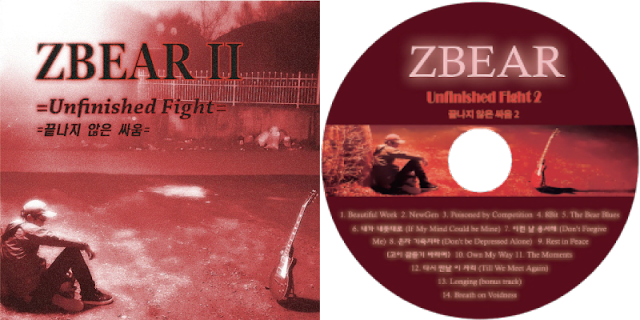 The internal wars that were left unfinished in 'Unfinished Fight 1' continue on 'Unfinished Fight 2'. The first part concentrated on the tragedy of a never-ending war, both external and internal. The second part takes on the same subject, but turns its focus onto the psychological crisis that one experiences in both dealing with and overcoming this tragedy.

The reason behind the psychological focus is this. When facing any issue, including the ones that I have touched upon in these albums, the solution can only begin with recognizing and acknowledging our current state. My observations present us as isolated beings, exhausted, and devoid of self-confidence. Time is against us as we keep failing to crawl out from a state of denial. Denial leaves us mentally constrained, and persistent constraint leaves a meaningful life beyond redemption. I wouldn't think anyone would welcome this loss. Thus, I felt the priority to touch upon this issue.

The whole point of exposing this darkness was a means to take the first step towards becoming conscious of its existence, not to create an additional mental deadlock. For instance, my intention behind the track 'Breath on Voidness' was for the listener to reach a realization of our current state rather than for the listener to delve into and fully absorb the sound in a 'literal' manner. Such an approach to listening to this album could lead to undesired results, and a certain (mental) distance is recommended. Of course, this is totally up to the listener in the end. I guess one reminder could be referred to the notorious stories regarding the side effects from listening to New Age music. Not that this 'rock' album displays any stylistic similarities as New Age, but similar or a variation of such side effects may occur.

On a different note, 'Beautiful Work' is a positive take on the beauty of our creations, despite most of them having been fueled by greed. And probably a musical continuation from the relatively accessible '난 항상 여기에 (I Always Will Be Here)' off of 'Unfinished Fight 1', '다시 만날 이 자리 (Till We Meet Again)' is, as the title suggests, myself looking forward to seeing you again.

Even if the rest of the album comes across as difficult to access for some listeners, if you would take a little patience to hear me through, and make an effort to empathize and 'interpret' my songs, that is the greatest reward I could ever ask for.


Conceived as a double album, I can guarantee that I have poured my heart into the whole process, from planning, to production, and the final release of these recordings. Although this marks the end of 'Unfinished Fight', this does not mark the end of my musical ambitions. I will see you wherever I set to make my stage, as a guitarist, as a performer, and as an artist.

This is ZBEAR signing off.

This album forgoes the standard format of an X-piece rock band.

This is just me, myself, and a handful of people with whom I am grateful to have been able to share my spirit as ZBEAR, hard rock guitarist.

Writing, producing, recording, mixing, and mastering were all left to these two hands.

Thus, I feel the sound quality has something to be desired.

However, I decided to wrap things up once I was convinced that the album had reached the level of achieving the aforementioned intentions.