Our history is plagued with wars. We live in a kill or be killed kind of world, and what for? It's not like any of us will be living forever. While I was thinking that we need not look further in search of a living hell, there were also moments that I had seen a glimmer of hope. It may have been a very shallow silver lining, but that didn't matter. I see many of our mistakes acknowledged and shared through various forms; technologies that once killed used in ways to save lives; the world becoming smaller and people creating communion with someone on the other side of the globe. These probably insignificant examples give me enough reason to realize why the human race didn't go extinct already, and so I guess the continuation of our race was able to reach the birth of myself. Despite my initial denial, I find myself becoming more open to the positivity that exists, and I applaud the positive wake that we as humans attempt to leave behind. Both the darkness and light, and the transitions of my mind are expressed in this song. 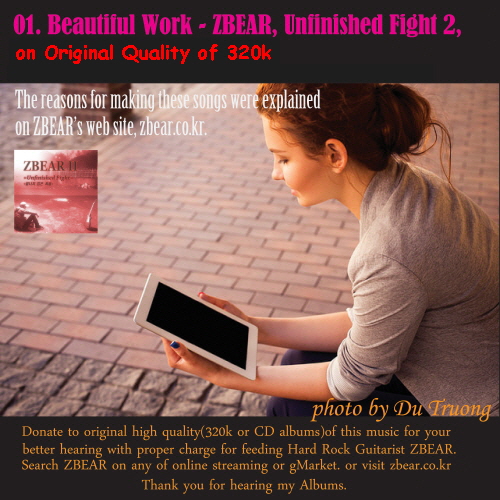 Old generations are replaced with new ones all the time. Unfortunately, we sometimes lack the respect that the past rightfully deserves. Progression is made based on what existed before, but anything that has lost its efficiency or 'current' value is treated as obsolete. An everyday example would be the pager which used to take us on an emotional journey that no smartphone would ever be able to provide. Old towns that hold memories dear to many people have been completely replaced by new buildings, leaving even the pets that we once buried with our own hands to the mercy of the bulldozers. The part I felt that was tragic more than the phenomenon itself is that it is rather hopeless to go against such changes. "NewGen" is a personal representation of this tragedy. 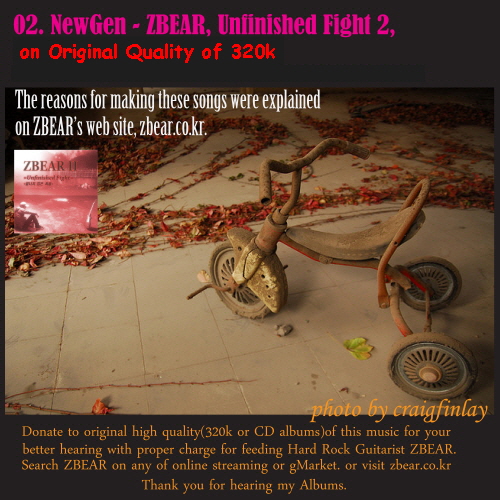 Competition seems to be an addiction, and the world is full of addicts. Even when they are smiling to your face, what's going through their brains is how to step on you and take that next flight higher. Establish a comparison system and go by the rules, and by the way, free emotions are not allowed. These people blend in with the rest, but they are constantly asking 'is he better looking than I am?', 'is she more popular than I am?', 'are they richer than we are?'... and this spills onto everything else in life. From higher grades, better cars, and bigger houses, to how much the price tag on my goddamn guitar is.
Care to spare a dollar? I know we make the same amount of money but I just need to see you with less. No, I can't lose. Yes, I f**kin' beat him! But...where the hell am I now?
It is an addiction for sure, and like any addiction, many fail to make it out of it.
The sounds on this track stems from my anticipation to see people freeing both themselves and others of these shackles. 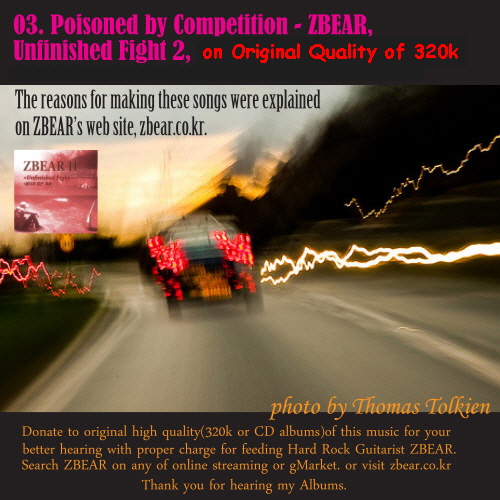 What a life. I've become too sick and too tired to even laugh or cry. This is when my old buddy, an 8bit game character, stares me in the face. Back when I used to play him, I didn't think much of his smile which you could barely make out through the shitty graphics. But now, I had to ask him, "you're going through all this crap, clearing stage after stage, and how in the hell are you able to maintain that smile? I sure as hell ain't able to do that." My 8bit friend replied, "This world does not 'require' us to make a variety of faces. There is no reason to laugh or cry, or get mad even. I just face the next challenge, and deal with it. After all, that is all the world cares about us anyway."
I had to shut up as I felt in him a far deeper sadness than anything I had experienced so far. 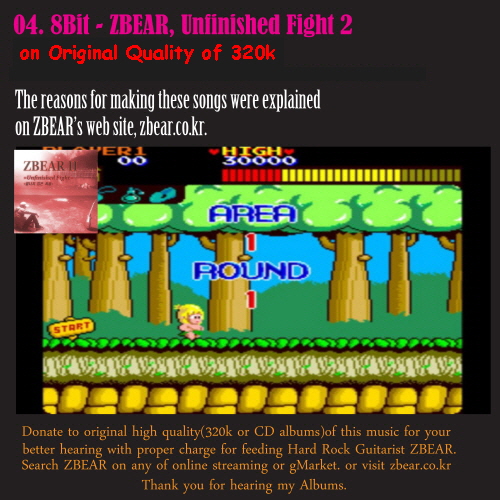 This is a blues based rock and roll track intended for rocking out and nothing else. This is me ignoring the world, or at least pretending to do so, as the fights continue around us. Just envision an actual bear rocking and dancing to the music. You may be able to picture it jumping and falling down. Join me on this rock and roll ride. Bob your head even if you don't feel like it. In no time, You'll feel better for it. 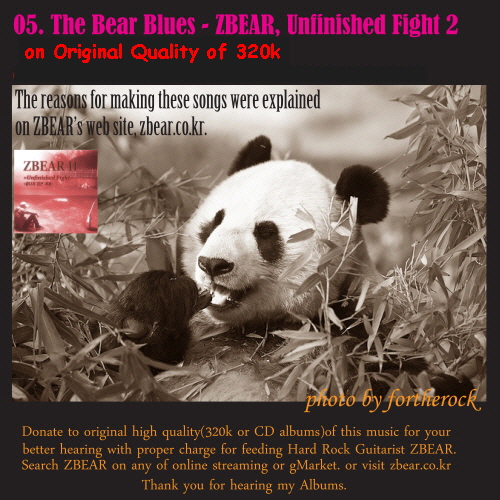 
Obsession is dangerous. Most of the time, it adds onto the problems that I am already facing. I know that. But letting go of that obsession can be the hardest thing ever. If we didn't have that gap between our realizations and our actions, the question "So what is it that you really want?" may not have even taken form. "Why can't my own mind ever truly be my own?" was the question that followed. Eventually I discovered that once I can truly let go, it immediately diminishes this gap. The emotions that occurred throughout this process was developed into these melodies and harmonies. If we actually had control over our minds, I am certain we would feel much better about our lives. 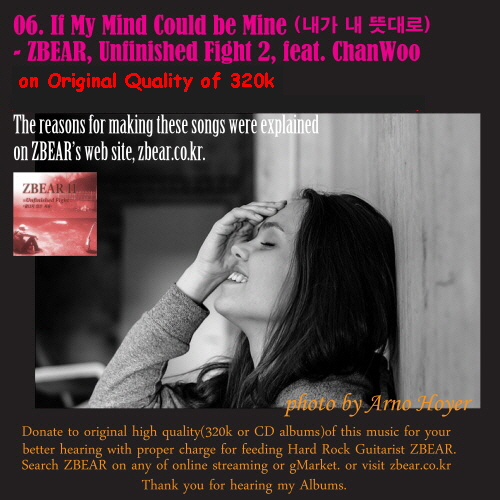 The hero in this song is sick of the emotional turmoil occurred through relationships. What he really wanted was to throw away the mask and touch upon real things, meaningful things. Obviously, things didn't work out that way. As a means to adapt, he took upon a facade of his own, in an attempt to relish the interaction between two facades, only to realize that a discrepancy had manifested between his emotions then, and now. He couldn't ask to be forgiven, neither could he ask not to be forgiven. He was in a deadlock. At the same time, he was seeking yet another facade to experience a different kind of interaction. This all feels like a waste to me, and this was more of a simulation than a reflection. The irony of the emotional journey is expressed in the music here, the irony probably attributing to the vast difference in musical style. 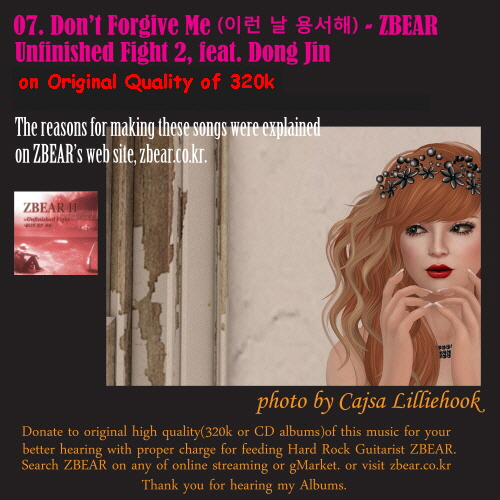 
It's been a while since Life took away from my everyday smiles. Just because I was down and out, I didn't want to hear people constantly telling me to 'get up'. Why the additional effort? I had to find the answer to the question, and for the answers to bear any meaning at all, they had to be sincere. Any option that lacked even an ounce of sincerity would not have been able to convince me. But then, I figured out that any time someone is moved by me, any time I put a smile on someone's face, I react. I feel life becoming meaningful, and I find the urge to live. A type of an action-reaction, if you will. I desperately wanted to remember this feeling, and that desperation was translated into this track. 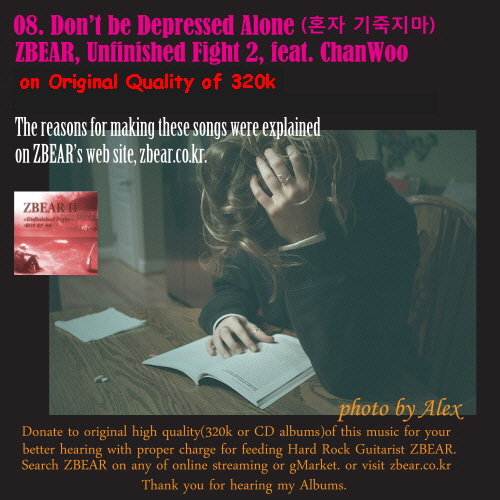 This is a dedication to a deceased actress who I knew little about. What I did know is that she had the most beautiful smile. Seeing how hard it is in today's world to hold a genuine smile such as hers, her sudden death left me frustrated, but her smile was engraved in my heart. I felt a connection between that smile, and the messages I wanted to portray through 'Unfinished Fight'. The production of this album having become a lifelong mission for me, and I would like to include those faithfully departed amongst the ones I play this song for. I wish her happiness in the afterlife. 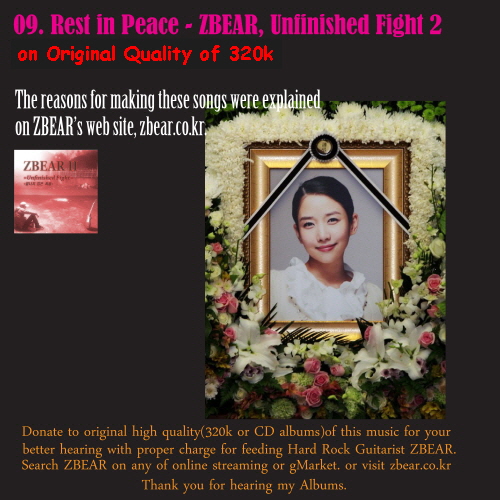 I have been focused on a single goal for quite a long time. My perspective towards this goal however, has constantly evolved. The sound of this song is shaped on how I view the goal today. Had I written this song in my twenties, the song may have been fueled with youth and passion. But back then, I was more focused on making it towards my goal rather than on how I view the goal itself. Thus, I doubt that I would have written such a song.
The way I see it now, it is not essential for goals and dreams to have a 'holy' status. You do not have to keep running towards it at full speed while losing your breath. Consistency, not speed, is more important, and actually, maybe that's enough. Because at times, doing your best can be dangerous even. Goals and dreams can afford to be approached more causally, and sometimes this can be far more productive in the long term. That is the message within this song. 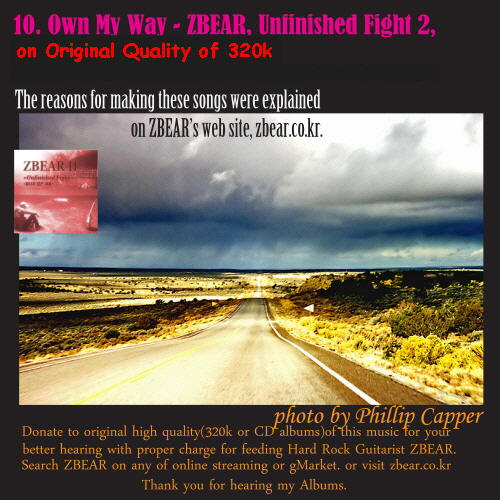 The autumn rain and winter snow numbs my vast variety of abhorrence. The turbulence discontinues and a new emotion takes place; one that reflects upon beautiful memories, and wants to approach the beauty itself. But then, the emotion evolves into obsession, making me realize that unlike what I had anticipated, the numbness was not sufficient. I am the insatiable ego. This realization makes me sad, and the moment of this sadness has been meld into this tune.
My question to you is, whenever you remember your beautiful moments, only to realize that they are no longer a part of your life, can you accept this revelation as-is, and still be satisfied with your current self? If your answer is yes, you deserve my envy. 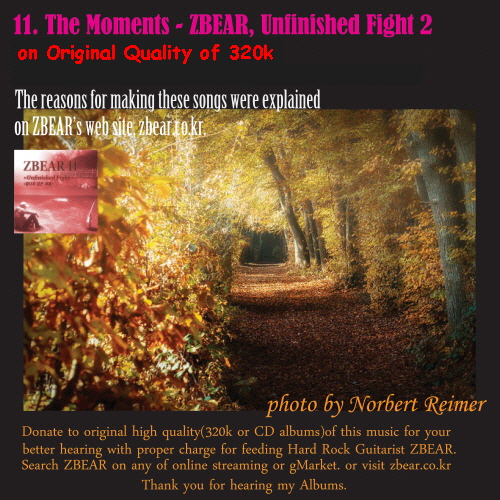 Whenever someone listens to my music, you become my bunch of flowers. Not unlike how one becomes another's flower when addressing each other by name. Would I ever have the chance to become a flower to you? I hope so even if it is confined to this stage where I interact with you all. 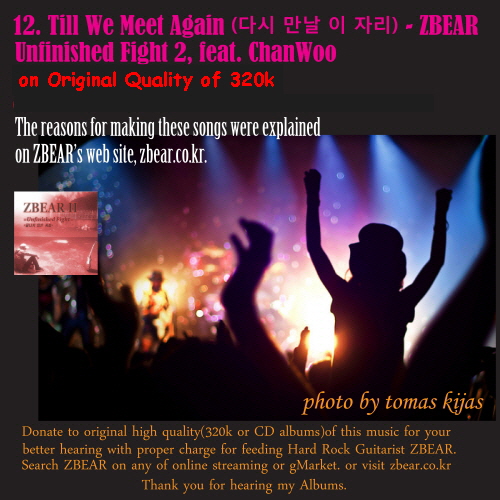 This girl had come to me. The reason though, was because she was having big trouble with her boyfriend. She asked me, hadn't I fallen for her the first time we met. I said that I did. She asked whether I was still interested in her. I could only reply that I could not since she already had someone. It was a wonderful feeling when she expressed a sense of fondness towards me, but once she became too drunk, I dropped her off at her boyfriend's place. They had yet to reconcile, but that was the best I could do at the time. On my ride back home, I found myself longing for that wonderful feeling again, and that's when the melodies hit me. I remember that moment as yet another fight going on inside of me, and as much as I do not wish to go through that kind of internal fight again, but I do come back to play this song every now and then. 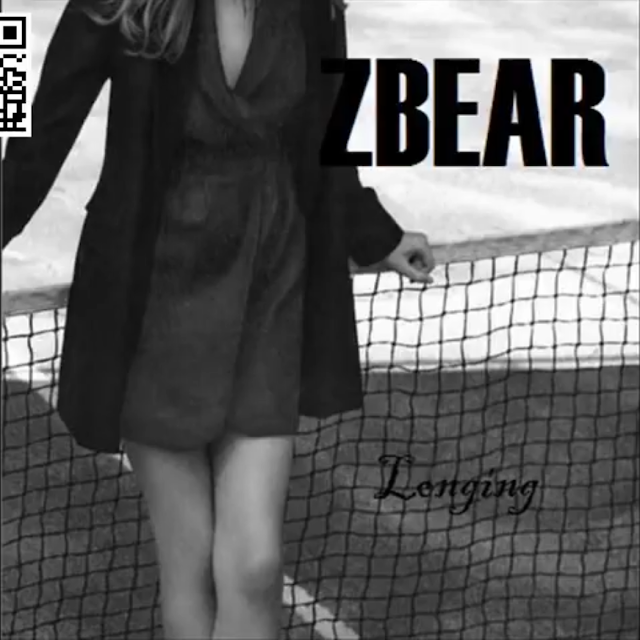 Emptiness would come upon anyone who constantly meanders without finding who you really want to be. I believe I am not alone in wasting years in this state of emptiness. For three whole years, my entire life was comprised of eating, sleeping, and playing games. Listless, faceless, and nothing but void accompanying me. I detested it, but did nothing about it. This song was written in that state, and was about me in that state. I had contemplated for the longest time on whether a song such as this should be a part of a 'rock' album, especially based on the concept that I have laid out in the descriptions. The reason "Breath on Voidness" eventually made it on here is because I felt this was also a part of an 'Unfinished Fight' that rages on internally. 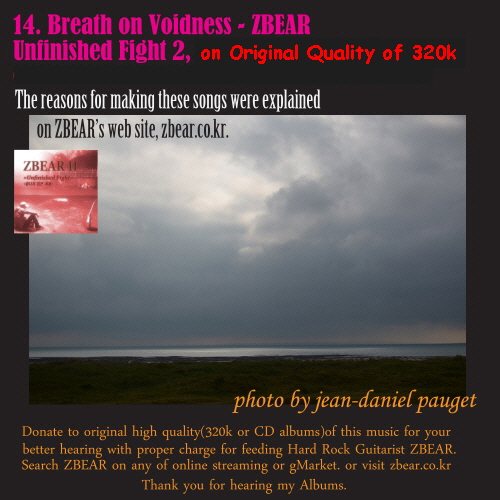